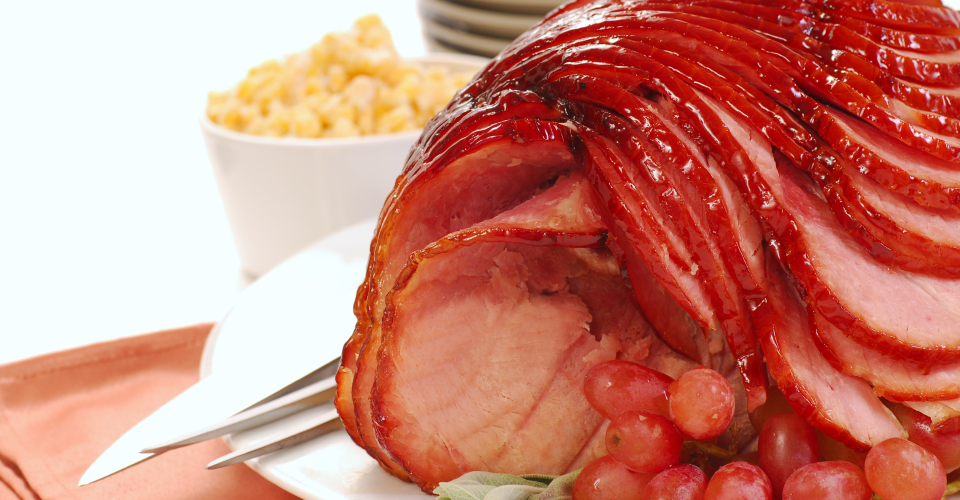 Get your Glaze On
The best glaze for a baked ham contain either honey, brown sugar or maple syrup. The saltiness from the ham and the sweetness for the glaze complement each other so well, that either of those ingredients make for a pretty special glaze.

The glaze I went for is a combination of butter, brown sugar, honey, Dijon mustard (adding a nice tang to the ham) and crushed garlic cloves.

From here you can add in spices like the traditional ground cinnamon and ground cloves, or leave them out. Most recipes call for decorating the ham with whole cloves between each cut.

Heat the butter in a small pot or saucepan over medium heat until golden browned. Add in the brown sugar, honey, mustard, cinnamon and cloves, stirring to mix together well until the brown sugar has completely dissolved, (about 2 minutes). This is your baste

You only need 3 steps to make the perfect, heavenly ham recipe!

Remove the rind or skin of the ham, ensuring you leave the fat on. Using a sharp knife score a 1-inch-wide diamond pattern (don’t cut more than 1/4 inch deep) over the entire ham. Place the ham in the baking tray; pour 1/3 cup of water into the base of the pan and cover the ham with two pieces of foil or parchment paper and bake for 30 minutes.

You’ll be a Christmas Superstar!